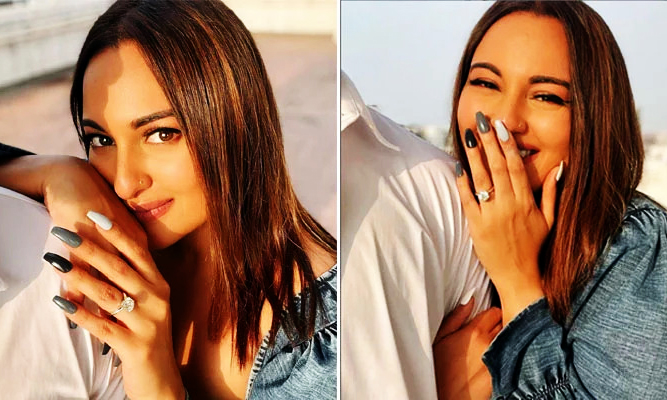 Sonakshi Sinha got engaged secretly: Bollywood actress shared photos with her beautiful ring and declared today the most important day of her life.

The actress shared her various hilarious photos along with the ring on Instagram.

In the shared photos, the ring worn by the actress is clearly visible while in one photo, the actress can be seen holding someone’s hand.

There are many Bollywood actresses who have not only got engaged but also got married secretly.

The list of actresses now includes the name of another famous and beautiful actress Sonakshi Sinha, who recently got secretly engaged.

This can be gauged from the fact that she herself is seen in the engagement photos but the person with whom she is engaged is not visible.

Yes, but it is true that the actress is holding her fiance’s arm and smiling, it is clear.

The actress wrote in the caption of the photos that ‘big day for me !!! One of my biggest dreams is about to come true and I can’t wait to share it with you.

Sonakshi Sinha got engaged secretly: The actress added that she could not believe that it was so easy but the actress has not officially announced her engagement or fiance.

It may be recalled that she has been seen with actor Zaheer Iqbal at various places, after which rumors were active that Sonakshi Sinha and Zaheer Iqbal have started liking each other.

Zaheer Iqbal’s reaction to the rumors also came to light when he wrote that he has been with her for so long that he no longer cares about these things but if anyone feels bad about his presence with Sonakshi then he Stop thinking about quotes.